Magnesium is an abundant mineral in the body and is found naturally in many foods, like green leafy vegetables. It is also found in over-the-counter medications, such as laxatives. The average American intake of magnesium, according to the National Health and Nutrition Examination Survey (NHANES Study) is critically low: Many Americans fail to consume the estimated average requirement (EAR) established by the Institute of Medicine. In addition, more than 57% of the population does not meet the United States Department of Agriculture requirements for magnesium in the diet. Intracellular magnesium levels are decreased by excessive intake of alcohol, salt, coffee, phosphoric acid found in sodas, diets high in calcium and high stress levels. Because of widespread nature of magnesium deficiencies, adequate daily intake of magnesium is critical for proper hydration, stress response, muscle relaxation, promoting healthy blood pressure levels, optimal bone mineral density, and blood sugar regulation.

The importance of bioavailability is obvious. If consuming a magnesium supplement has little effect on improving the body’s magnesium balance, there is no reason to ingest it. Signs of inferior mineral supplements include the use of cheap, poorly absorbed, rock-salt minerals like calcium carbonate and magnesium oxide. These mineral forms slow and limit absorption, relying on adequate stomach acid to release magnesium ions which then enter the body via passive diffusion. And, because they tend to remain in the intestines longer, these forms of mineral supplements can cause intestinal distress such as constipation (calcium carbonate) or diarrhea (magnesium oxide). Magnesium Soothe provides the additional benefit of highly-absorbed, Albion® mineral chelates. Albion® is the world leader in manufacturing highly bioavailable mineral chelates, a specialized form of minerals bound to amino acids. This patented process creates organic mineral compounds which use active absorption mechanisms in the gastrointestinal tract to greatly enhance mineral absorption. In a magnesium comparison study reported by Graff et al. at Weber State University, Albion®’s magnesium amino acid chelate had:

In addition, other comparison studies have shown significantly superior absorption of magnesium chelates compared to other mineral forms: 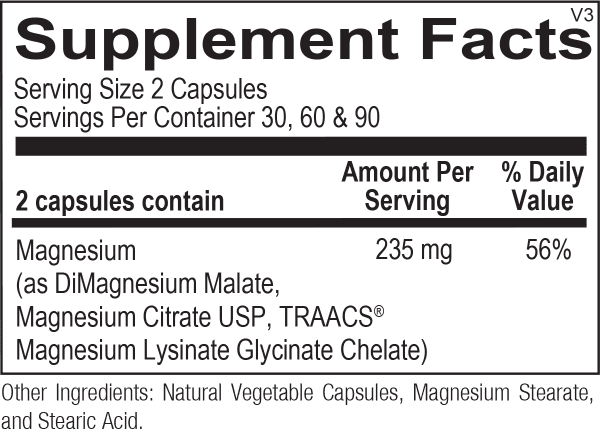 Be the first to review “Magnesium Soothe” Cancel reply