Thorne’s Pectinate contains citrus pectin that has been pH-modified, which breaks the citrus pectin molecule into much smaller pieces that are better absorbed into the bloodstream.* Modified citrus pectin acts by surrounding and trapping metal ions, which allows the metal ions to be gently eliminated from the body.* Alginate, from seaweed, is comprised of chains of polysaccharides that also act by surrounding and trapping metal ions.* Finally, R-lipoic acid is a sulfur-containing antioxidant that binds to metal ions. R-lipoic acid also increases the level of the body’s premier intracellular antioxidant glutathione, in addition to having its own antioxidant activity in the body.* 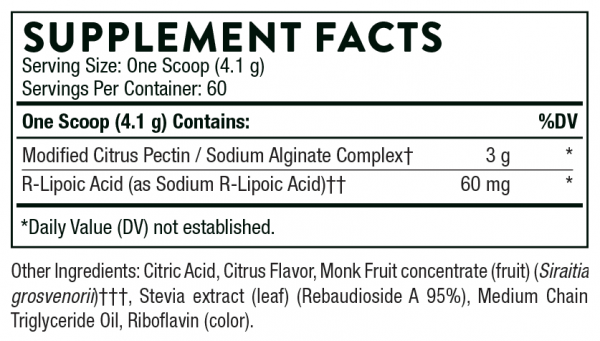 Be the first to review “Pectinate” Cancel reply