Glutathione has been dubbed the “master antioxidant” for its ability to recycle other antioxidants in the body. Glutathione’s importance in supporting overall health is documented in numerous peer-reviewed studies. These benefits include supporting healthy detoxification, promoting a healthy immune system, and moderating oxidative stress levels.*  Glutathione is also essential for brain function, metabolic and biochemical reactions such as DNA synthesis and repair, and is critical in supporting the health of organs such as the lungs and kidneys.*

Not all glutathione products are created equal

Typical glutathione capsule benefits are minimal. Absorption is fundamentally difficult due to its naturally limited bioavailability. Its unstable nature means it is often oxidized during the manufacturing processes or when exposed to heat during storage. Simply put, most glutathione products do not effectively absorb into the cells. For glutathione to be effectively utilized by the body, it must be easily absorbed.

To ensure maximum absorption of glutathione, a liposomal solution is required. Liposomal glutathione enables greater cellular absorption in all areas of the body. Glutathione is produced by every cell; however, due to environmental stressors and toxins, the body can benefit from additional cellular support.

The study showed significant increases in intracellular glutathione levels after just 2 weeks of use, as well as demonstrating its ability to support healthy NK cell function and oxidative stress levels.*

Glutathione is a tri-peptide composed of the three amino acids L-glutamic acid, L-cysteine, and L-glycine.

Glutathione supports the normal function of the immune system.* 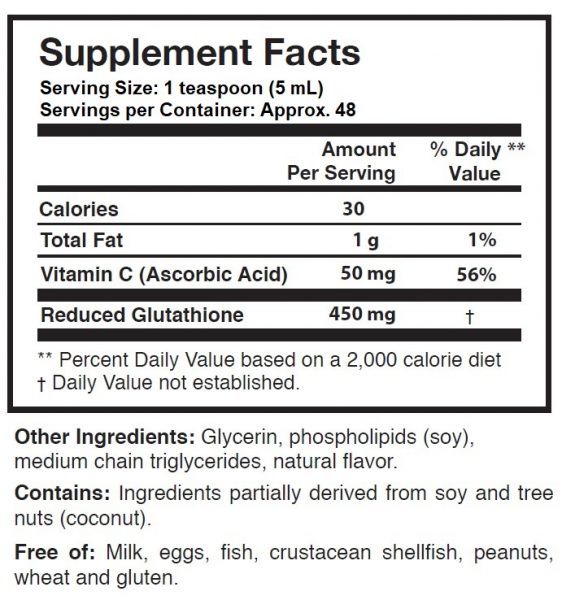